The code sharing host (Pensieve) is dedicated Linux server in DMZ, accessible from external locations as well as from internal network (dual homed) - for the build server access.

Users are separated by Unix permissions:

Inside each user, there are multiple projects.

These projects will have multiple repositiories and will follow the naming convention:

The PROJECT_BASE_NAME-THINKWRAP is the “blessed” repository from Integration manager workflow.

The external developers will be pulling from this repo, merging on their local workstations and pushing their released changes to their respective repositories in CodeShare

Inside each user there is ACL layer (Gitolite) which allows read-only or read-write access to repository.

Only ThinkWrap integration managers will have write access (push) to blessed repositories.

Depending on project setup, external developers may or may not have pull access to each other repositories (for sharing code before it goes through integration).

Internal counterpart for the code sharing

Internally, we will have per-project area on internal repositories host - CodeServer

There will be similar ACL layer as in CodeShare, with somehow relaxed protection rules (tradeoff security for practicality):

Depending on project needs / size / requirements, we can support wide variety of control over code release repository

All this access magic is possible because of the combination of the SSH and Gitolite (see http://sitaramc.github.com/gitolite/master-toc.html)

Everything is described in the manual, MAKE SURE you read these parts:

Gitolite provide access to repositories using single “hosting user” - this is the only Unix user that actually exists. In documentation, this hosting user is called git.

In our setup, this hosting user is customer user - e.g. client1. Consequently, there are many hosting users.

For each hosting user, we will have separate Gitolite configuration - it is very litlle overhead, all that Gitolite is bunch of Perl scripts two data directories and one small administration Git repository.

The only access mode is using the public key and SSH. We do not support

All developers (including the Integration manager) are “virtual” identities. All will have to provide their public keys and the account admin (the person setting up Gitolite for the account, e.g. client1) will be responsible to

The Integration Manager can be the same person managing the account but it does not have to be. It is easy to allow multiple developers with write access to blessed repositories. Unlike the identity of the account admin (which is determined when Gitolite is set up for the account), these users can be added or removed at any time.

The setup of Gitolite is described here: http://sitaramc.github.com/gitolite/qi.html - it described “single account” hosting.

To make sure that everybody understands how does this translate to our situation, here is detailed step-by-step walkthrough to both setting up one user account and simulation of the development .

The only way how to use Git is ssh with public key and we will not provide shell access, only git access. This makes sure that nobody from external developers can log into CodeShare and poke around in the repositories he/she does not have access to or even trying to gain root access or access othe accounts.

Keeping very long password and rotating it can further increase security. For really paranoid customers, we can disable login shell access in /etc/passwd, but this will cause additional work the system administrator to make sure file ownership and permission are correct (when using root access).

This guide is using “temporary” VM named jenkins0 (the playground for build server) playing the role of CodeShare and shows all steps for setting up Gitolite on Jenkins0 for user client1.

Main reason for this detailed log is to allow somebody else administer it and help my memory after the vacation !

I have created users:

This setup describes process for client1 and can be repeated for any other.

Gitolite is distributred as Git repo, so we clone into home directory of hosting user (==client1)

Pre-requisites for next step are:

We need a public key of the person that will be admininistering this hosting account.

It must satisfy few requirements:

As we have freshly created the user ‘client1’, the ~/.ssh/authorized_keys is empty

I have already copied my public key to jenkins0 - it is there as file ‘miro.pub’

Inside this file, there is username@hostname - it is important that you name the file properly (I found out the hard way)

This created two Git repositories: gitolite-admin (which will be used for all administration) and test one.

All this had to be done on jenkins0 (the CodeShare host)

On workstation from which the public key originated, I will need to clone the gitolite-admin repo:

I am in the temp working directory ‘gitolite-on-jenkins0’, and ‘gs’ is an alias for ‘git status’

Here is what happens under the hood:

The cloned repository has two areas:

To add user for the hosting account, all you need to do is to copy properly named public key file under keydir/, add it and push the change.

Here I have added tkuser@luke.pub (note that this naming is OK - see Gitolite docs for details).

The other file I am adding is from third VM and has weird name. I wanted to test the third format with two @ signs but get to it. Ignore this file.

After copying the files, we add them in git, commit locally and push

Next step will be editing gitolite.conf

I will create two repositories for project named unimaginatively ‘projectOne’.

The projectOne repository (yes, I know this is not according naming convention - there should have been two repos named projectOne-tkuser, and projectOne-SomeOther developer. I will be cheating a bit and use “projectOne” as developer repository shared by two developers: tkuser@luke, and miro@radegast.

User miro@radegast will be wearing second hat as integration manager and will also have access to “blessed” repository named “projectOne-Blessed”.

OK, this is also not according naming convention - which I have created AFTER this exercise.

The syntax is documented in Gitolite, but here is the idea: but just naming the repositories, they will be created when we push gitolite-admin repo.

When we push, lost of magic happens on the other end:

Also, worth noticing that miro.pub found its way into keydir - even if it was never added (the setup action copied it there).

Time to simulate some development.

I am still on Macbook, wearing my “developer” hat, go to directory where I work with client1 project and clone: (the directory is empty as we are just starting):

Again, I used ‘client1@hostname’ to connect.

Note that the url does contain just repository name, while on server side the repos are stored in folder ‘repositories’ and the directory is named ‘projectOne.git’. This is OK.

I will also clone the blessed repository (now wearing my Integration manager hat):

Lets set up some content for the team to work on:

I work in blessed - create 2 files, commit locally and push

For the first push, you MUST specify the upstream repo and branch. Here is what happens if you do not:

OK then, I will push to origin (this is where I got the blessed repo from) and push the only branch - master

Now, second developer joined project. I will simulate him from Luke. His name is tkuser and his public key was already added to gitolite-admin

I ssh to Luke - checkout the ProjectOne, connect upstream ProjectOne-blessed, add some files / modify some

From first commit (as there was never any development from Luke, I just installed Git there today), we get message that Git has trouble determining committer info and is using Thinknostic User <tkuser@LUKE.(none)>

We can fix this easily:

The next commit will be better

As we see, two commits to local repo have different indentities. I could fix that by ammending the commit, and I would in real project, but lets move on:

Now we will share the code with the users on the CodeShare:

What we have forgotten to do was to integrate code coming from ThinkWrap and shared in blessed repo.

Let’s hook up the blessed to my local repository on Luke:

This is “read-only” link even if it does not say so. We can now fetch the changes from blessed (I could have named it anything, it is just name).

This would be ideal situation if I want just to see what is going on, without impacting my local master.

More practical would be to merge the changes into my master, which is what pull does. Again, for first time I must be explicit what do I want to pull - here is what happens if I am not:

Eventually, I will get annoyed by GhostScript and kill it by defining my favorite alias:

So we are fine. All is merged, but only locally. Git indicates we need to push to origin.

I have all files:

Let’s push (now there is no need to say ‘master’):

What would happen if I wanted to short circuit the wait for integration manager and see my changes published right away in blessed repo ? Let’s try of Gitolite access control works:

I will not give up - in addition to link the blessed repo from my projectOne, I will try to clone it locally (which I can do as I have read access and push it back:

But push will fail:

Back to Macbook and put on my Integration Manager hat: 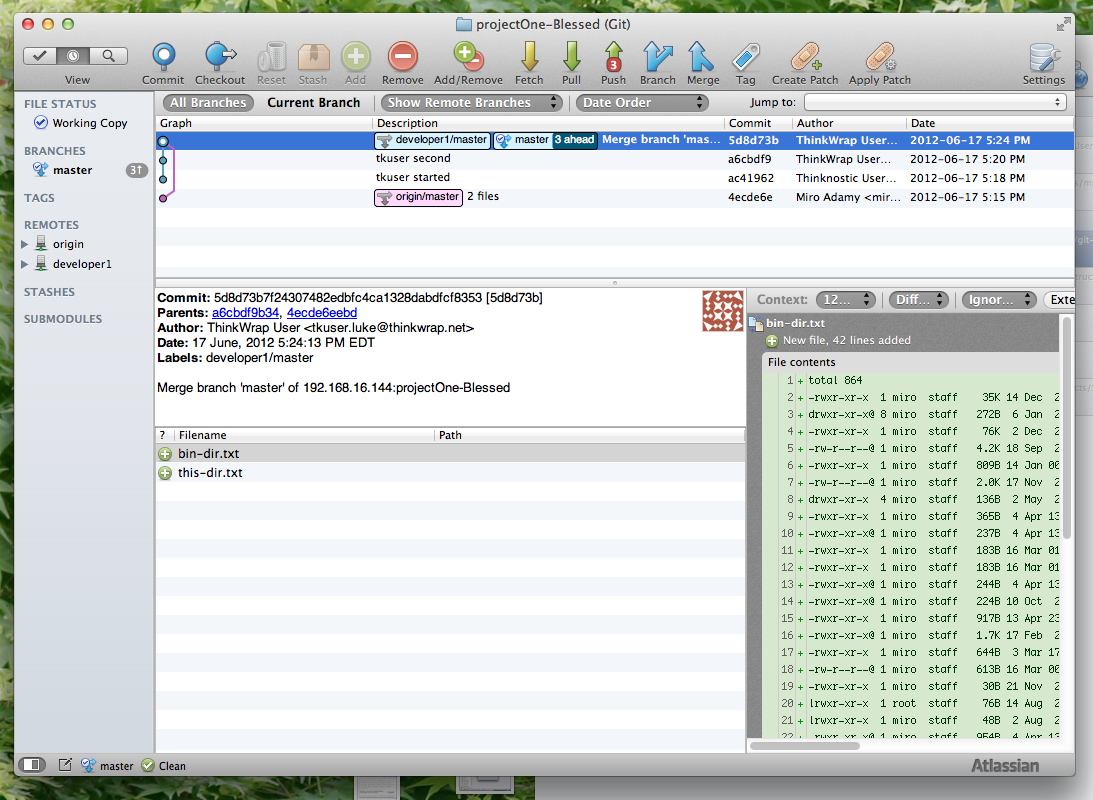 Back on Luke, I am tkuser now:

OK, this may be surprising: how come that IM pushed changes to blessed and tkuser does not see them ?

What happened here is that the merge in Blessed was fast forward to latest and the latest is already in projectOne rep (as it originated from there). So nothing really changed just few references were moved.

Or we can even see the fancy ASCII-Artsy graph:

For the final part, lets create scenario that does not happen if every developer has his/her own external repo on CodeShare, but which will certainly happen in the setup where multiple developer push to same external repo - kinda centralized mode.

I will start by add local change to projectOne repo on MBPro by Miro. Back on Macbook:

At the same time, tkuser on luke did also change something - starting from same starting code as miron on Radegast: attempt to push will this time end up with conflict

Note that local commit is always OK, it will be the push that fails:

Git was nice enough to tell me what to do. Let’s pull:

Merge resulted in new commit - it was done right away as there were no conflicts. We can push again:

Last note is on security. The hacker’s soul in tkuser wants to see what else except projectOne is on CodeShare. Let’s log on.

Attempt to bypass the security by logging on as hosting user

Bummer. Gitolite was nice enough to show all repos made available for the user, but rejected the login.

Therefore: public key is the only supported way how to access CodeShare repo.

For admins and such who know the password the ssh is still there (unless we change it git-shell).

I will prove this by logging in with different identity (to prevent my public key being sent) - I will use my public key I use for github:

In this case, it asks for password and logs me in

And that is end of the walkthrough